New motor vehicle sales in Queensland were 4.7% higher in February than in January in seasonally adjusted terms, driven by a surge in SUV sales, which could eventually overtake sales of passenger vehicles (see chart below based on ABS data released yesterday).

It’s likely there is an element of pent-up demand in the recent pick up in sales. Over the last ten years, while the population aged 15 and over has increased by 24%, new vehicle sales have increased by less than 6% (see chart below). Consumers may have been holding off on buying a new car due to the economic uncertainty since the financial crisis, but the need for a new car might be becoming overwhelming for many. We’ll need to wait and see if the current pick up continues before drawing any firm conclusions. A sustained pick up in new vehicle sales really doesn’t seem consistent with the short-term economic outlook. 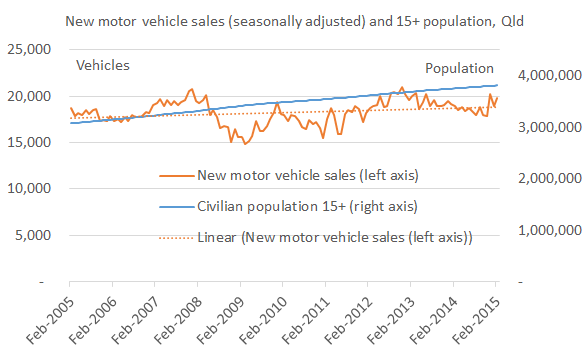