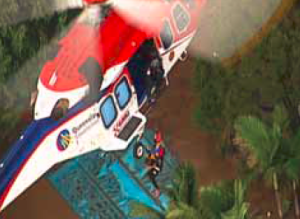 The Productivity Commission has injected a huge dose of economic rationalism into its recent draft report on natural disaster funding, which contains a recommendation to cut future Commonwealth support from 75% to 50% of the repair bill – a recommendation that could cost Queensland more than a billion dollars in assistance in the event of a natural disaster. It’s sure to have the Treasury bean counters in the Executive Building on George St terrified. While I applaud the Commission’s commitment to economic rigour, its recommendations are hugely inequitable. The Commission has forgotten that Australia is a Federation, that natural disasters can happen in all States, that they often have multi-billion dollar repair bills (e.g. around $7 billion for the natural disasters of the 2010-11 Summer), and there is a good case for the Commonwealth, with its superior funding capacity, to cover the largest share of the cost.

Far North econ-blogger Pete Faulkner has written a superb post criticising the Productivity Commission’s arguments: Productivity Commission report on Disaster Funding a real problem. I think the Treasury and Premier’s Department would be well served if they copied and pasted Pete’s post into the Queensland Government submission to the Commission regarding the draft report. Pete acknowledges the Commission is right it would be better to spend money preparing for natural disasters (i.e. mitigation measures) than spending money to clean up after disasters. However, it’s very harsh to require new mitigation spending at the same time as assistance for cleaning up after disasters is cut:

…where the real problem with the report exists is that the Commission is also recommending the Federal Government cut their disaster funding contribution from 75% to just 50% now. In the past 5 years this change would have required something in the order of $4bn additional funding coming from somewhere else. This, of course, simply means that the additional costs will be worn by State and Local authorities. Clearly, in the case of a major event the Local Authority (and in all likelihood the State) will be unable to meet the huge costs involved. Insurance is either impossible, or impossibly expensive, to obtain.