WHAT would Townsville look like if there were a million people living in the city?

That’s what Townsville Enterprise hopes to find out through a concept design competition it is running to find the best ideas for ensuring the city retains its great lifestyle as it grows.

Townsville Enterprise deserves some credit for being so forward-looking and visionary, especially given current Queensland Government population projections only have Townsville growing to around 300,000-350,000 people over the next couple of decades (see the chart below with projections for low, medium and high population growth scenarios). If you (crudely) extrapolate from these projections, Townsville wouldn’t reach 1 million people until around 2081 at the earliest and most likely not until around 2101. 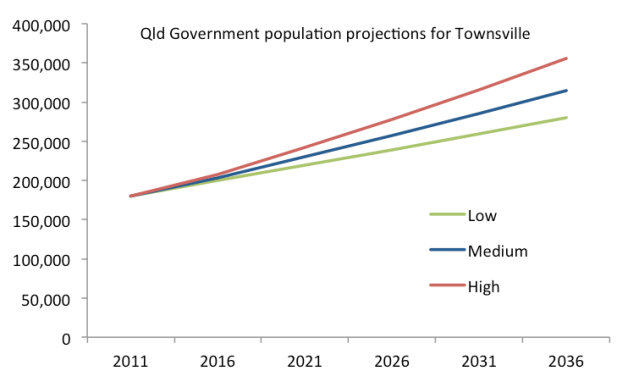 This entry was posted in Townsville and tagged population, populationprojections, townsville, townsvilleenterprise. Bookmark the permalink.