In incidental remarks in its report An investigation into allegations relating to the appointment of a school principal, the Crime and Corruption Commission identifies what many see as the big problem with the Queensland Government: the politicisation of the public service. Regrettably, as the Commission notes in paragraph 576:

A discussion of the politicisation of the public service is outside the scope of this report.

This isn’t the CCC’s fault. Its job is to investigate corrupt conduct, and I should note former Deputy Premier-Treasurer Jackie Trad has been cleared of that. But we should question the status quo in which successive governments have stacked the public service with loyalists and even non-partisan public servants get the message that maximising the government of the day’s re-election prospects is the number one priority. The CCC makes this comment in paragraph 585:

…in some cases public servants may feel pressure to be “over-responsive”. The conduct uncovered here demonstrates the real danger of public servants being “overresponsive” or “over-sensitive” to the perceived wishes of their political masters.

But is this the fault of the public servants or their political masters, who after all are really in charge and have Ministerial Responsibility? Regardless, public servants are left carrying the can for this fiasco. A Deputy Director-General of Education receives a real bollocking in paragraphs 626 to 631:

The DDG bypassed his own portfolio accountability structures (reporting through the DG to Minister Grace) and was liaising directly with the Deputy Premier and effectively granting her a role in a process she did not have and, beyond wanting the position to be an Executive Principal, granting her a role she had not sought…

…Moreover, it is difficult to avoid the conclusion that the DDG was over-responsive and allowed either his perception of the Deputy Premier’s view, or his desire to achieve an outcome that he believed would please her, to influence his decision-making.

Anyone familiar with corporate governance will know the term “tone at the top.” It’s a real concern a public servant would behave in the fashion identified by the CCC. Was he a rogue operator, or was such behaviour inevitable given the “tone at the top”?

This is such a bizarre incident which should be the catalyst for real reform of our system of governance in Queensland, possibly including the re-introduction of an upper house to provide additional scrutiny of the government of the day (see my 2018 book Beautiful One Day Broke the Next for further commentary on Queensland’s abolished upper house).

The weirdness of this episode is nicely illustrated by the Brisbane Times reporting yesterday that a journalist asked Jackie Trad “if she felt used by department officials” and Trad responded, “I guess it’s hard not to feel that way.” Frankly, I’m stunned our formidable former Deputy Premier-Treasurer may have been “used” by bureaucrats from the Education Department.

But let us accept the findings of the CCC report, and not forget the bigger issue of concern is the ongoing politicisation of the public service, which the CCC has drawn attention to in its valuable report, even if it notes the issue was outside its scope. 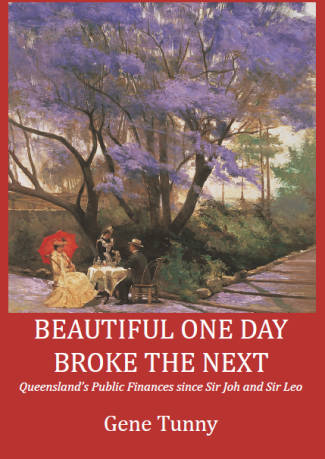 I discuss the need for greater scrutiny of Queensland Governments, including possibly by the re-establishment of an upper house, in my 2018 book Beautiful One Day, Broke the Next, published by Connor Court.