Destination Gold Coast CEO right the GC’s been missing out

I’m usually sceptical of pleas from regional leaders for greater government investment in their regions, but I think the Destination Gold Coast CEO has a legitimate grievance. The Gold Coast Bulletin reports:

THE Gold Coast’s tourism boss has blasted the “failures” of successive state and federal governments to invest [in] boosting visitor numbers and building infrastructure.

Destination Gold Coast chief executive Annaliese Battista used her keynote address at the Gold Coast Bulletin’s Future Gold Coast forum to deliver a stinging attack on what she called a “lack of investment”.

She’s right, at least according to state government capital expenditure data. The Gold Coast comes third last in terms of Queensland Government capital purchases per capita in 2019-20 (see chart below), as I demonstrated in my post from June Qld Gov’t CAPEX – Brisbane’s inner city the big winner. 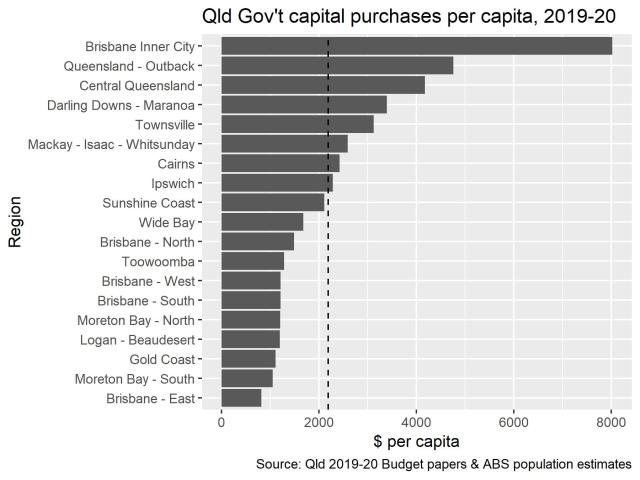 Lower-than-average per capita state government capital expenditure on the Gold Coast is not a recent phenomenon, as shown in my 2017 post Is North Qld under funded by the state government relative to the south east. Once again, I suggest that the state government should offer greater analysis and justification for its capital spending by region than it currently does.

Maybe the Gold Coast doesn’t need additional state government CAPEX, although motorists stuck in traffic on the M1 would strongly disagree. I expect Gold Coast residents would eagerly welcome some of that $5 billion+ being spent on the arguably unnecessary Cross River Rail in Brisbane’s inner city being spent in their region instead.