Is North Qld under-funded by the State Government relative to the South East?

In Saturday’s Courier-Mail, State Affairs Editor Steven Wardill reported on the unmovable perception among North Queenslanders that their region is under-funded by the State Government, despite official data showing otherwise. Wardill noted:

Facts and figures are dismissed out of hand. Northern Queensland may spend 31 per cent of the state’s revenue and produce only 21 per cent of it, but that kind of detail is cast aside as “bullshit, mate” by those who insist there’s an imbalance.

It’s accepted that the state’s capital commandeers all the cash, even though it’s not true. It’s what’s best described as a “vibe” and it’s venomous.

I am unsure of the source of the 31 versus 21 percent figures, but I am confident that North Queensland is not being under-funded by George St relative to other regions, based on official budget data from Queensland Treasury that I would consider reliable. Figures that I presented in my post-State Budget post show that NQ regions receive significantly more State Government capital works funding per capita than South-East Queensland. That chart was based on data presented in the 2017-18 Budget, and I have now analysed the data in previous Budget papers to determine that regional Queensland typically receives more than its fair share relative to SEQ (see chart below).* 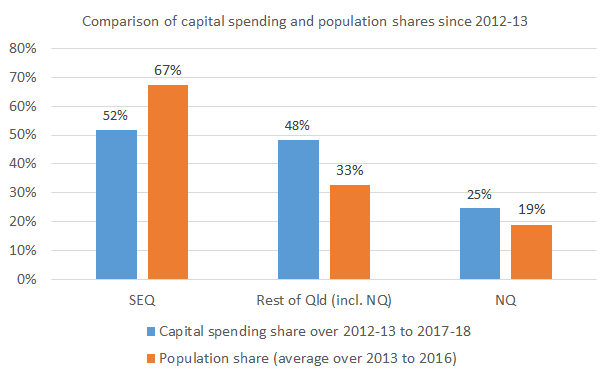 Indeed, if any region should be complaining, it is the Logan-Beaudesert region in SEQ which has been persistently under-funded relative to other regions (see chart below). 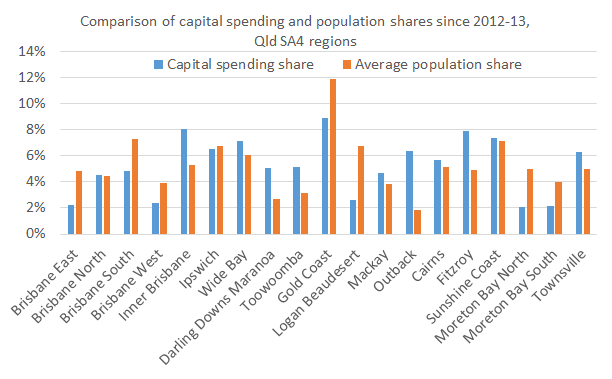 If there ever is a separate State of NQ, its residents may well end up wishing they had remained with the rest of Queensland, once they realise just how good a deal they actually had.

15 Responses to Is North Qld under-funded by the State Government relative to the South East?