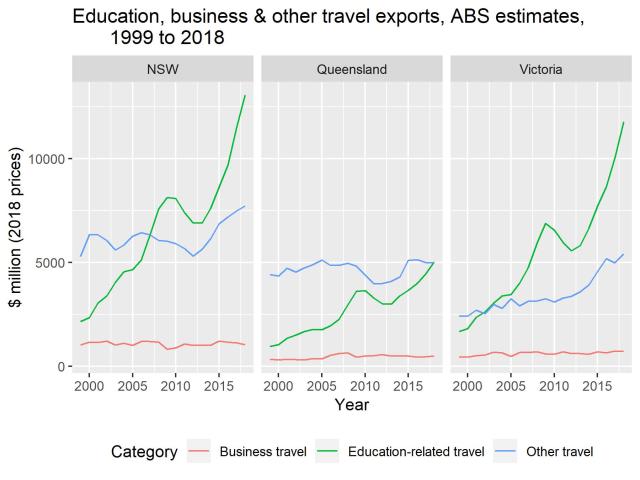 Notice how education-related travel has really been the outstanding performer among the different international travel categories in Queensland. Otherwise, it appears international tourism has been flat for the last few years after its rebound in 2014 and 2015. Tourism and Events Queensland should be asking what is going wrong with its marketing, given it really can’t take credit for the growth of international education.

A strong critic of Queensland’s failure to reach its tourism potential is Simon Pressley of Propertyology, a real estate investment adviser. Last month, in his post Queensland has double-digit growth potential, but what’s missing?, Simon wrote:

The Sunshine State scores an ‘epic fail’ for not capitalising on enormous economic opportunities from a worldwide tourism boom which commenced way back in 2012.

Finally, regarding the Spring Hill international education precinct, a fascinating mural has been painted recently on the triangle building on Boundary St which is part of the International Education Services empire (see image below). The young Asian person painted in the mural represents all the international students passing through IES, while the image of the young Indigenous persons acknowledges Boundary St’s history, as an actual boundary in the early days of British settlement of Brisbane, when Indigenous people had to remain outside the boundary after curfew.