In the lead up to the federal election, the Chamber of Commerce and Industry Queensland (CCIQ) has included some bold commentary in its latest Suncorp CCIQ Pulse Survey report (on p. 16):

The key factor influencing sentiment within the Queensland small business community during the March quarter was emphatically the trepidation of a change in the Federal Government.

Quotes from businesses included in the report suggest federal Labor is generally perceived as less business-friendly than the Coalition, and at least one respondent appeared concerned about the Opposition’s policies on minimum wages and penalty rates.

The Courier-Mail in its article The business stats of “serious concern”: Report nicely summarised the CCIQ report’s findings yesterday:

HALF of Queensland’s small and medium businesses saw profits fall in the first three months of this year.

The latest Suncorp-CCIQ Pulse survey, released today, shows that business confidence is continuing to languish in the doldrums.

The survey of 400,000 firms found 51 per cent reported declining profitability in the March quarter.

These findings are unsurprising to me. As I’ve noted in several presentations this year, leading indicators of activity, such as levels of business approvals and expected heavy construction activity, have been discouraging. Here are the latest building approvals estimates from the ABS up to March: 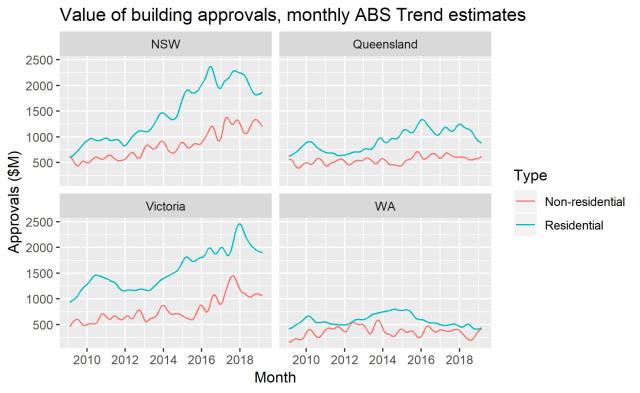 And here is engineering construction work yet to be done (but intended to be done) in December quarter last year.

Well done to CCIQ for releasing such a frank and fearless report representing its members in the middle of an election campaign.