Bold BDO’s vision: half of mining jobs automated by 2020

BDO has published an extraordinary report presenting its vision of a massive uptake of robotics in the mining sector in the next few years. In its Near Future of Mining Report BDO speculates:

By 2020, robots will replace more than 50 percent of miners, and mining accidents will be cut by 75 percent. Half of the miners will themselves be retrained to run the technology controlling the robots.

This seems too soon, just two years away, for such an extraordinary transformation of the sector, but, as BDO explains, it is simply a continuation of the existing trend toward automation that has already seen the adoption of driver less trucks and drones (e.g. see How drones are changing mining).

The increasing automation of the sector means we may not see a strong pick up in employment in the sector as the sector’s resurgence continues, although clearly there will be local jobs programming and maintaining robots, driver less vehicles and drones. It also means indirect economic impacts (i.e. multiplier or flow-on impacts) in the Queensland economy would likely be lower in the future, particularly given much of the robotics to be used in mining applications would be imported. Nonetheless, the resources sector will continue to be important to the Queensland economy, and to the Queensland Treasury through the $3-4 billion in royalty revenue each year, but we may not see it employ as many people as it did at the peak of the last boom again (see chart below). 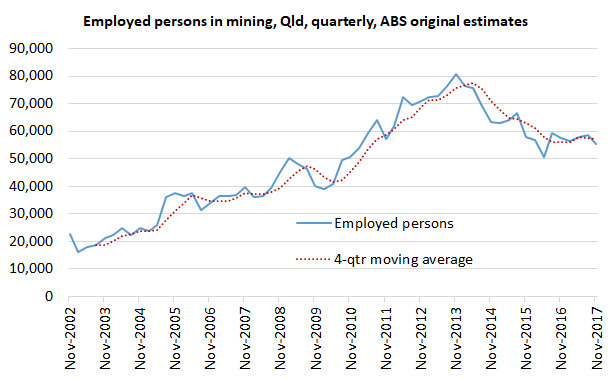 On balance, the boost in productivity through robotics would be a positive development, and it would mean that freed up labour can be used elsewhere in the economy (so long as we have a flexible economy without excessive labour and product market regulations and we have an efficient and effective education and training system). Our current policy settings will be subject to a huge test over the next few decades as robotics and artificial intelligence continue to transform our economy.

1 Response to Bold BDO’s vision: half of mining jobs automated by 2020