All week we have been hearing the awful news about all the dead cattle in North and North West Queensland as a result of the recent floods. An estimate of around half a million dead cattle has been suggested, although some sources are suggesting it could be much higher. At this stage the ultimate impacts are still unclear, although I understand the state government and industry peak bodies are currently developing estimates of the economic impacts. Given all the figures and claims that are currently being heard in the news, I thought readers may be interested in some facts that can usefully inform economic impact estimates.

In Queensland, beef cattle numbers are typically around 11-12 million, averaging 11.5 million over 1999-00 to 2016-17. A loss of 500,000 cattle would represent a 4-5% loss of the stock of beef cattle in the state. Of course, the economic impact in the affected regions would proportionately be much higher, particularly if you take into account backward and forward supply-chain linkages (e.g. backward to farm supplies and forward to abattoirs). In the Northern and Southern Gulf regions and the NQ Dry Tropics regions which appear worst affected, there were an estimated 3.2 million head of cattle in 2016-17, so at least one-in-six head of cattle in these regions may have perished based on an assumed loss of at least 500,000 head (see chart below and the map at the bottom of the post so you can see where the Natural Resource Management regions are). 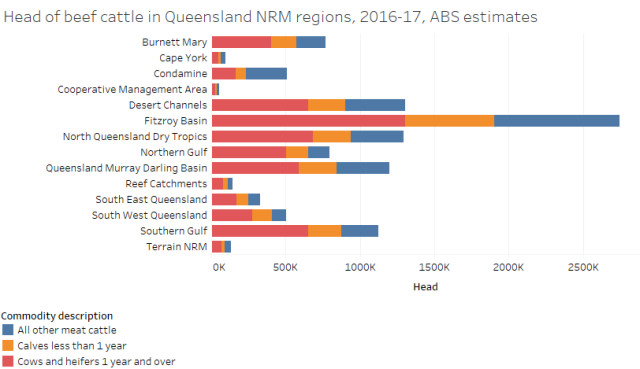 What could this mean for the state economy as a whole? Consider that the Queensland Government’s handy AgTrends publication forecasts a gross value of production of cattle and calves of just over $5 billion in 2018-19. Additionally, it forecasts value added from meat processing at $2.3 billion, the vast bulk of which (at least 80% I would assume) would relate to beef. For simplicity, let’s scale that up by 50% to allow for value added in the transport, wholesale and retail sectors, and let’s say the floods result in a 5-10% loss in activity over 2019. My back-of-the-envelope calculation is that the economic impact of the loss of cattle related to the floods will be around $500 million to $1 billion this calendar year. Queensland gross state product (GSP) in 2019 will be in the $370-380 billion range I expect, so the loss of cattle could shave 0.1 to 0.3% off GSP depending on just how bad the losses are. And given the loss of calves, part of this impact will persist into 2020.

Of course, these are just the losses related to beef cattle. It is expected there will also be losses in the resources, manufacturing and other sectors. For example, Incitec Pivot, which manufactures chemicals and fertilisers, has already announced a hit to earnings from the closure of the rail line between Townsville and its Phosphate Hill source of supply (see this SMH report and SBS report). Such losses will be an additional drag on economic growth. I expect these negative impacts will, in the short-term, only partly be offset by repair and reconstruction activities.

Queensland Treasury is currently forecasting economic growth in 2018-19 at 3%. Given these floods and all the discouraging economic data we’ve seen lately, I expect Treasury would revise this forecast down, to either 2.75 or 2.5%. Given the adverse economic impacts, as well as the costs of repairing infrastructure, the Queensland Government’s fiscal deficit in 2018-19 will probably increase from the $2.6 billion currently forecast by the Treasury. 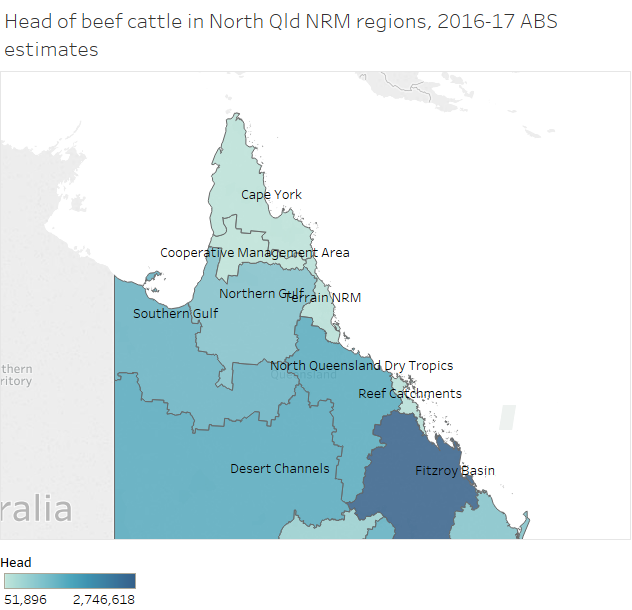 Update: Since I published this post I have noticed an estimate from AgForce of a $500 million loss of livestock associated with the floods, as reported in the Brisbane Times:

In a future post I will explain how we need to be careful when discussing economic loss and economic impact estimates, as they are not necessarily comparable. A good explanation in the context of US Hurricane Harvey can be found here:

How natural disasters affect US GDP

This Brookings post by eminent US economist Martin N Baily is also useful: