But what does the future hold? To gain some insight, we can examine building approvals data, the latest batch of which (updated with February data) were released last Wednesday by the ABS. Broadly speaking, as discussed below, the outlook is positive, based on recent approvals data and expected public sector capital works (e.g. Cross River Rail) and resources sector developments, possibly including the Adani mega mine (see this recent AFR article), although many observers remain doubtful it will ever proceed.

Non-residential building approvals have been at higher levels over the last couple of years after recovering from the trough in 2014-15 (chart below). This gives us reason to be confident about non-residential construction activity, although Queensland has not experienced the massive surge in non-residential approvals seen in NSW and Victoria. 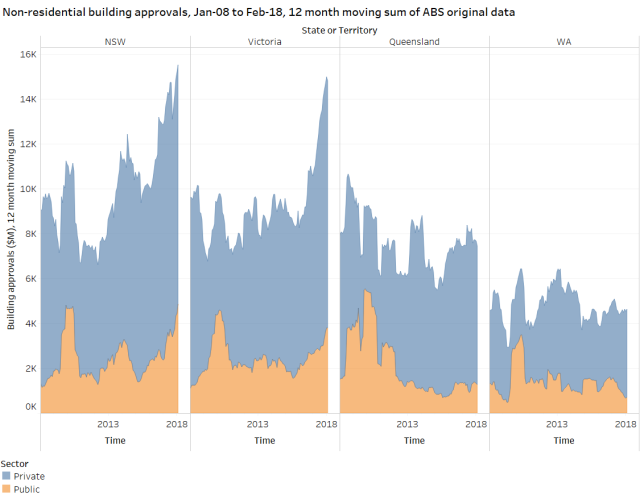 A closer look at the non-residential building approvals data reveals a large part of the recent surge in NSW and Victoria was associated with buildings for education in the public sector. Also, Victoria has seen a doubling in the value of approvals for office buildings. Regarding Queensland, what struck me about the data is that we are disproportionately intending to invest in new retail and wholesale trade buildings, which strikes me as odd given recent trends in the sector. 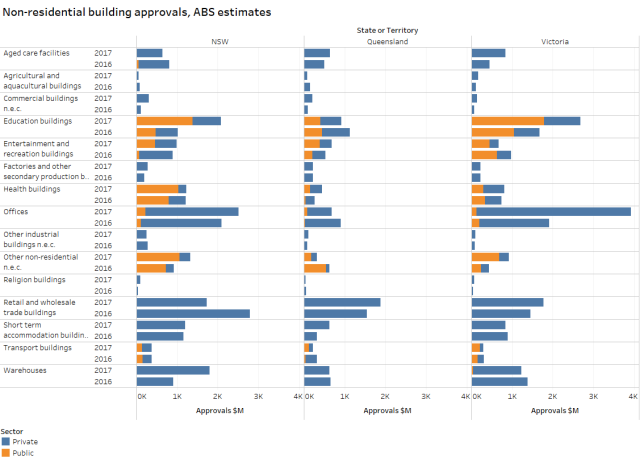 Incidentally, Master Builders Queensland has a good summary of the outlook for non-residential construction in its 2018 Building Industry Outlook (p. 7):

2018 will see improvement in the demand for non-residential construction work with increased investment in a number of key industries that have been performing well.

The tourism industry will continue to perform well, requiring further investment in hotels and other short-term accommodation…Retail and wholesale trade buildings which is the largest source of demand for non-residential work, has already seen an increase in building approvals which bodes well for the coming year.

The office market will continue to work through an excess of supply and the industrial segment will see no growth.

Note that the non-residential approval figures I refer to above do not encompass engineering construction activity, such as that associated with roads, bridges, rail lines, and earthworks. But we can be confident regarding engineering construction activity due to increasing state government capital works spending (expected to increase from $7.9 billion in 2017-18 to $9.8 billion in 2018-19 according to the 2017-18 MYFER) and positive developments in the resources sector.

The Queensland Resources Council (QRC) provided me with a brief update on its sector earlier this week. Key points included:

Developments such as these reinforce my confidence in the sector.

Regarding residential construction, Queensland’s new home approvals are on an upward trend (see chart below) and this will offset to some extent the decline in apartment construction. This was foreshadowed by Queensland Treasury last December in its 2017-18 Mid Year Fiscal and Economic Review (p. 8):

Overall, Queensland residential building approvals appear to be at reasonable levels, while they have soared in NSW and Victoria. 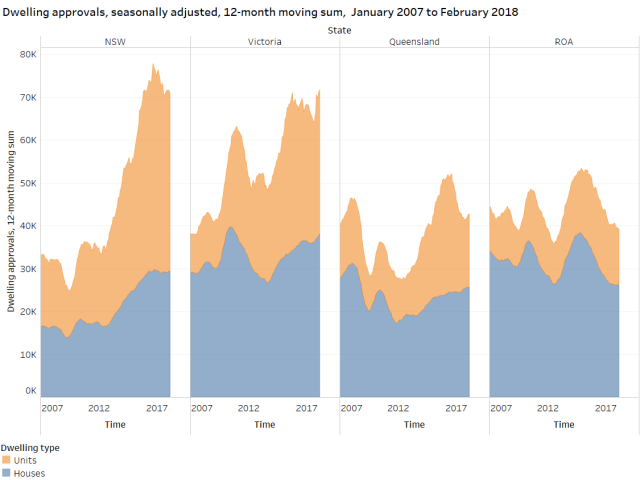