Adani no go would be bitter blow to Townsville

Townsville Mayor Jenny Hill is one of the strongest advocates for the Adani mega mine, and she must now be very worried that the mine will not proceed, and that Townsville will miss out on the mine HQ, FIFO jobs, and contracts for local businesses. Townsville has certainly been doing it tough economically in recent times, and it is desperate for the new jobs the mega mine would create, directly and indirectly (e.g. see my post Why the Adani mega mine is welcome news in Townsville). Over the last decade, the number of employed persons in the Townsville region fell by around 6,000, according to figures published by Pete Faulkner in an interesting recent post, in which he notes:

“The downturn in the Townsville economy has clearly been broad-based and impacted a large majority of industry sectors with a total loss of almost 6,000 jobs over the decade.”

If it were not for strong growth in public administration & safety and the health care & social assistance industries, i.e. in jobs largely funded by the public sector, Townsville’s economy would be in a far worse state (see Pete’s chart reproduced below). 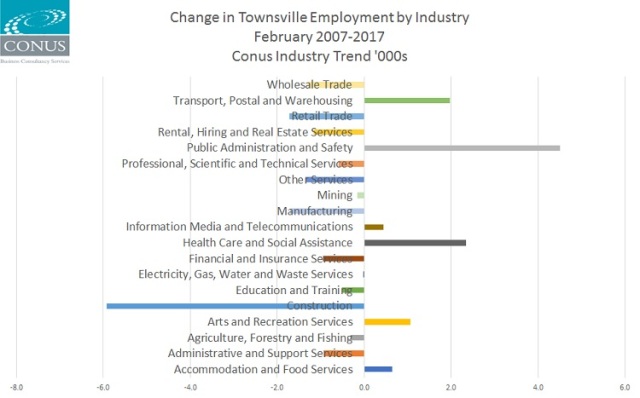 So it is no wonder that the Adani mega mine is seen as so critical, and why the news of recent days is so disappointing for so many in the region.

Further reading on the recent news regarding the Adani mega mine include thought-provoking posts by John Quiggin and Nick Behrens:

Why Adani must not be given a $320 million ‘royalty holiday’