Why the Adani mega mine is welcome news in Townsville

It is welcome news to the local community that Adani will base its Carmichael coal mine headquarters in Townsville , which has struggled with job losses and high unemployment over the last couple of years. The Townsville Bulletin reports:

“Townsville will be at the centre of the $21 billion development, tipped to become the biggest mine in Australia, and function as the regional headquarters for operations across the North.

The Bulletin understands this arrangement includes setting up the city as a major FIFO hub housing about 1500 workers who will be regularly flown to the mine.

Further employment opportunities will be created through a cutting-edge remote operations centre where driverless machinery and mining technology will be run from Townsville.

As many as 500 white-collar jobs are also expected to be announced and Adani has committed to not using workers with 457 visas.”

Undeniably this is fantastic news for the Townsville region, although I do not expect the project will fully make up for job losses in recent times. Nonetheless, it will inject some much needed money and confidence into the region.

Townsville’s economy has certainly been struggling in recent times. Over the twelve months to October, the Townsville regional unemployment rate averaged 10.6 percent, compared with a State average of 6.1 percent (see Queensland Treasury’s regional labour force brief). And the Townsville region has lost in the order of 10,000 jobs (first chart below) with an associated collapse in the employment-population ratio (second chart below). 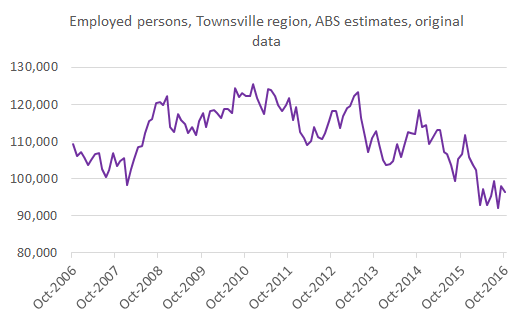