I am again fortunate that a fellow economist and friend, this time Stephen Thornton of Bluegreen Economics, has provided me with an interesting guest post on a topical issue. And, as Secretary of the Economic Society of Australia (Qld), I am always pleased to promote new ways that economists can be useful to society.

The apartment construction boom in the last two years has undoubtedly been good for the Queensland economy. However, the scale and pace of construction in such a short period also has a downside with it likely to result in a short-term plateauing or slight decrease in apartment sales prices. Lower returns for investors can be expected too in some areas as vacancy rates increase and the competition for the relatively smaller pool of tenants intensifies. This will be especially the case for inner-city and inner-ring attached dwellings as supply exceeds demand over the next few years.

Management and decisions of bodies corporate will be even more crucial to ensure owners’ funds are spent wisely to keep a lid on strata levy increases while maintaining apartment complexes to a high standard.

A recent Queensland Court of Appeal decision therefore is very timely. Bodies corporate and the supporting management services industry have been placed on notice that their directions and decisions must be evidence-based and with a clear rationale as to why they are ‘reasonable’.  The Court determined that the decision of a body corporate [Viridian Noosa Residences CTS 34034] to not approve an individual lot owner’s request to extend their deck into common property airspace by 5m2 was unreasonable. There were a number of reasons for this, one of which was that the airspace was unusable by anyone else.

While the relevant Act requires a resolution without dissent and a number of owners at a general meeting had voted against the proposal, the Court took at different view and supported the original decision of the body corporate adjudicator to allow the proposed deck extension.

In light of the ‘Viridian decision’, Archers, one of the larger body corporate management companies in Queensland, posted this month that body corporate decisions should be well evaluated and documented, based on facts, and as much information gathered as possible with external specialist advice sought where needed. [The full post and decision link can be found here http://www.abcm.com.au/news/article/how-to-make-reasonable-body-corporate-decisions]

While much specialist advice sought by bodies corporate consists of legal opinion, economists can be of great value for certain issues and can potentially save them from making a poor decision. A good example is an access issue at one of the larger complexes in Brisbane which is currently under consideration (referred to as ‘Lot A’). In brief, the neighbouring lot (‘Lot B’) was purchased a few years ago and the developer has recently demolished the older buildings to make way for a premium 33-lot apartment building. Lot B has an existing right of way through Lot A as direct access from the public road is not available.

Lot A’s body corporate committee, concerned traffic on the easement will be troublesome, has suggested that the final section of the easement be extinguished (approximately 20m) and a new easement be negotiated and created that allows for a more direct path of access to Lot B. Lot A’s committee informs its owners that this will come at little or no cost to them as Lot B will be asked to pay for the construction of the new access. Potential traffic issues will be mitigated. The only issue is that two or three visitor carparks will be required to be removed as well as a section of garden to create the new access.

Using cost-benefit analysis and a little research, it becomes clear that this proposal does not stack up. While undoubtedly traffic on the existing easement will be reduced, the cost of the proposal far outweighs the potential benefits to Lot A owners. Lot B is also not greatly advantaged. This is because the increased traffic on the easement has been calculated by a traffic engineer as part of Lot B’s development application to council (subsequently approved). The report shows few additional vehicles will be using the easement in peak-hours, a crucial piece of information publicly available on council’s website overlooked by Lot A.

Second, no value has been placed on forfeiting the visitor carparks and area of garden (50m2 – 70m2, depending on final design). While Lot A would retain ownership of the land, an easement leading into Lot B would effectively make it unusable for Lot A. In the Viridian case, 5m2 of common property was determined to be valued at $10K – $20K. Notwithstanding the convenience value of having the approved number of visitor carparks for family and friends (and that council approval would be required for the removal of the carparks), the value of the land Lot A is considering to effectively give up, with its proximity to the city, might be valued at $100K or more.

While most bodies corporate and their committees do their best, engaging an economist or similar, even for some initial assessment, can be beneficial to strata owners to protect the value of their investments.

Stephen Thornton is a social economist and principal at Bluegreen Economics 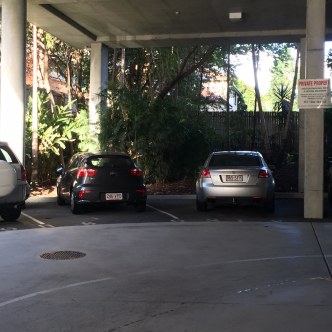 Bodies corporate can make poor decisions when not well advised, such as giving up valuable car parks to allow an easement to a nearby property, as discussed above.

This entry was posted in Uncategorized. Bookmark the permalink.