At a panel discussion on tax reform in Brisbane last night, there were some important insights for the current taxation debate made by former PM John Howard’s economic adviser Peter Crone, Australian newspaper contributing editor Professor Judith Sloan, and Griffith’s Alex Robson. Peter noted that one of the motivating factors for the State Governments having accepted the GST in the late 1990s was that they were faced with a huge loss of revenue, some $5 billion, from a 1997 High Court case that ruled some so-called business franchise fees were actually excise taxes and constitutionally invalid for the States to impose. So there was a real urgent and obvious need for a GST from the perspective of the States. Given the lack of a similar historical context at the moment, in my view, any changes to the GST are highly unlikely, and indeed GST reform is being opposed by the Victorian Government, practically ruling it out in the short-term.

Peter provided five lessons based on his experience in John Howard’s office during the development and implementation of the GST:

Judith Sloan picked up on Peter’s last point and noted that she rejects the view politicians need to be careful they do not spend all their political capital on reform. She argued that instead they need to build up political capital by developing and prosecuting the case for reform. Judith also noted that with tax reform “the devil is in the detail”, and argued we need to distinguish between a debate over changing the tax mix (a legitimate debate) and increasing the tax burden (a debate we should not have, given the tax burden is already high).

On whether Australia has a revenue raising or spending problem, Alex Robson earlier in the night reiterated the point he made at the Conference of Economists a couple of weeks ago that the problem is not revenue, which for the Commonwealth was around its long-term average (since the early 1970s) of around 23.5 per cent of GDP, but expenditure, which at around 26 per cent of GDP in 2014-15 has been higher than the long-run average of 24.2 per cent (see chart below). 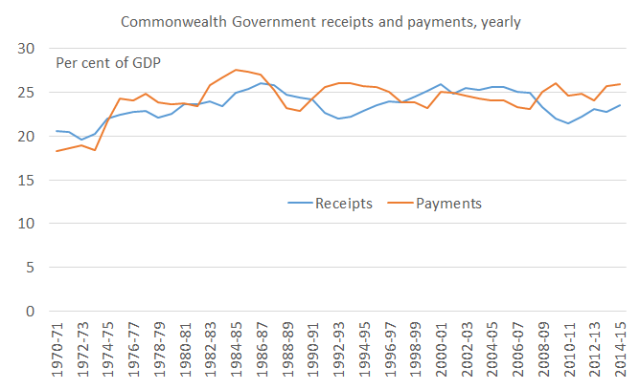