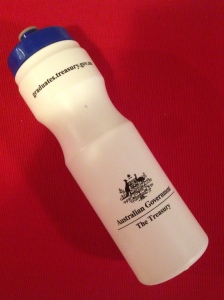 The official Treasury water bottle. A pleasant surprise in the ACE 2015 conference bag.

Thanks to Graeme Davis from Treasury, Alex Robson from Griffith, Miranda Stewart from ANU and Paul Abbey from PwC for some informative and stimulating presentations at the tax policy panel discussion on Wednesday 8 July at the Australian Conference of Economists 2015 (ACE 2015), which is being held at QUT in Brisbane. Graeme started off with a memorable observation that an efficient tax system is an oxymoron. Taxes will typically distort behaviour to some extent, and the goal of tax reform is to make the system less inefficient. Graeme was clearly inspired by Jean-Baptiste Colbert’s observation that the art of taxation is in plucking the goose to get the largest amount of feathers with the least possible amount of hissing.

To the distress of at least one audience member, Graeme went on to argue that the tax system is so incredibly complex and affects so many different choices in the economy (e.g. work-leisure, consumption-saving, investment choices, etc), that it is difficult to figure out exactly what reforms would be beneficial. Graeme appeared skeptical of the impact of negative gearing on housing affordability, and blamed State Government stamp duty and council restrictions on development for a lack of affordability.

Notably, the audience member referred to earlier challenged Graeme on his view about the difficultly of understanding tax policy impacts, and noted that extensive modelling has been done in the UK on the economic impacts of the tax system. Graeme replied, correctly, that modelling in Australia has been less extensive, and, in any case, he wouldn’t expect modelling would be able to properly capture the complexity of the system.

Overall, assuming Graeme’s comments are consistent with the Treasury line on tax reform, I expect there is very little prospect of changes to negative gearing or the tax treatment of capital gains, or regarding company tax, and I’d note the Government has already ruled out changes to super tax concessions. Hence, I expect the Commonwealth will instead focus its attention on pressuring the States to reform their own taxes (especially cutting stamp duty) and to accept a broader GST, possibly with a higher rate, with the Commonwealth clawing back some grant funding.

Other highlights from the session included: