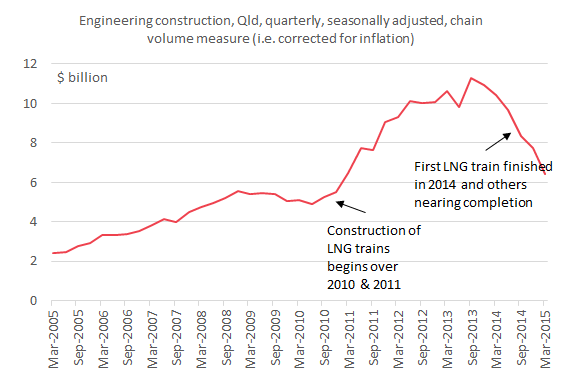 About the great American mountain-man Jim Bridger, Johnny Horton sang “That he was making history never once occurred to him.” I wonder if the men and women who have worked on the Curtis Island LNG plants have realised that they themselves have been making history. The huge scale of the projects, at around $70 billion in total over 5-6 years, has meant that they more-or-less led to a doubling of heavy construction activity in Queensland during the peak financial year of 2013-14 (see chart above based on latest ABS data for March quarter 2015 released today).

It is natural, therefore, that, as the projects wrap up, the level of engineering construction activity measured by the ABS declines. The large decline in engineering construction is, of course, a big shock to the economy, but, as I’ve commented previously, Queensland appears to be enduring the shock relatively well (see Qld economy enduring shock from end of mining boom as well as could be expected). The tick up in residential building approvals (seasonally adjusted) in Queensland in May (see chart below based on today’s new ABS data) also gives me confidence, although I’d note Pete Faulkner is less optimistic in his post on the new approvals data.

Regarding the massive scale of the Curtis Island LNG projects, I’ve previously noted they are using the equivalent of 13 Eiffel Towers of steel (see my post on the 2013 Energy Skills Qld conference). See also:

What it takes to build $70 billion worth of LNG plants: Bechtel construction facts

Regarding the historic default by Greece on its IMF loan repayment, I’m reasonably confident that, even though its exit from the Eurozone appears inevitable, and financial markets will over-react, the Greek crisis is a sideshow as far as the global economic outlook is concerned, as I commented in my ABC radio interview on Monday.