Following the ABC radio and online news coverage I received yesterday on the interstate migration issue, a friend of mine pointed out that redundancies in recent years, notably in the Queensland public service (which I thought were necessary for efficiency reasons, by the way), would have been a significant contributor to out-migration to southern states. Indeed, departures to NSW and Victoria experienced a spike in 2013, in the middle of the previous Queensland Government’s term of office (see charts below). It was the spike in departures to Victoria in 2013 that led Queensland to record a net loss of people to Victoria for the first time. 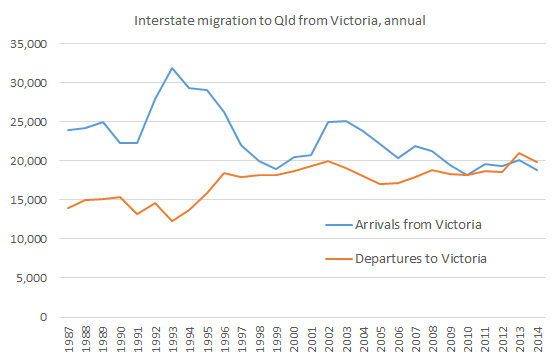 A big hat tip to my friend, affectionately known as Toad, for suggesting the importance of public service redundancies to the interstate migration patterns.