As Secretary of the Queensland branch of the Economic Society of Australia, I’m very pleased that, on Wednesday 15 July, the day after the Treasurer delivers the State Budget, a senior Queensland Treasury official, Greg Uptin, will give a briefing on the Budget’s economic forecasts at a lunchtime ESA (QLD) seminar in Brisbane CBD:

With the Queensland economy going through a large transition at the end of the mining boom, it will be fantastic to get some insight into the Treasury view on the economic outlook. At the time of the mid-year Budget update in December, the Treasury was forecasting economic growth of 2.5 per cent in 2014-15 and 5.75 per cent in 2015-16. It is likely these numbers will be revised downward, possibly by a lot.

Regarding 2014-15, the Queensland State Accounts show a fall in gross state product (GSP) of around 1 per cent for the first two quarters, and growth would need to be super strong in the first half of 2015 to make up for that fall. That said, state final demand (which does not include net exports) was slightly positive in March quarter according to the ABS National Accounts, and there are good signs our exports are picking up nicely (see chart below and Qld economy enduring shock from the end of the mining boom as well as could be expected). 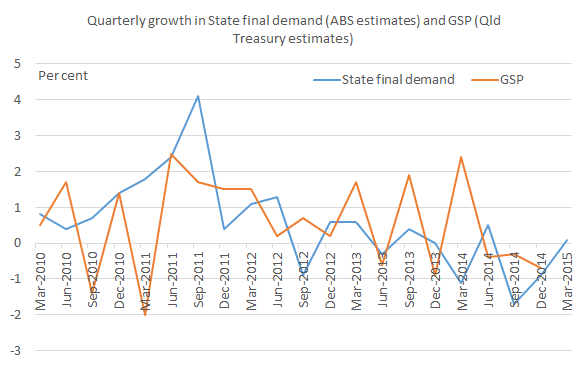 Regarding 2015-16, and its current high growth rate forecast, much will depend on whether the momentum of recovery is sustained and whether the LNG projects in Gladstone aren’t subject to further delays in production and export. Treasury will also need to consider the impact of the much lower oil price, which influences the LNG price through a formula based on the Japanese Crude Cocktail.

All these issues and more I hope Greg will cover in his presentation. Following his presentation, a panel of economists, including Morgans’ Chief Economist Michael Knox and me, will provide some commentary on the forecasts. And then it is the audience’s turn to offer views and ask questions. If you’re based in Brisbane, or in town for the day, I hope you can make the seminar.