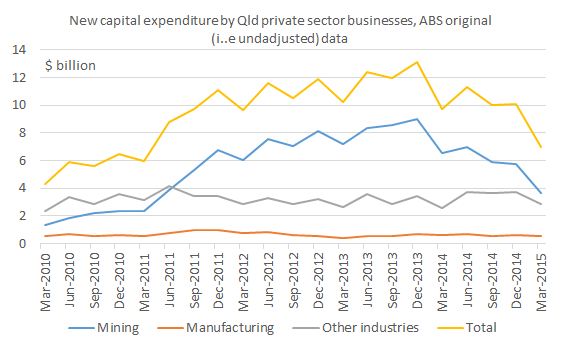 The technical recession Queensland experienced in late 2014 may extend into early 2015 based on new ABS data showing the large drop in mining investment from its extraordinarily high levels has continued into the March quarter of 2015 (see chart above).

The new capital expenditure data are for private sector businesses, so they do not include dwelling investments by households, which many economists are hoping will continue to record the increases they have recently and will hence provide some offset to the decline in investment being led by the resources sector.

On a positive note, private sector capital expenditure in Queensland outside of mining was up 5.6% through-the-year (noting that a quarterly comparison is unreliable given the data are not seasonally adjusted and investment is typically lower in the March quarter).

That said, based on what businesses nationally are telling the ABS about their future investment plans, the economic outlook now appears unfavorable, as leading economics commentator Peter Martin has observed (Economic outlook slips from ‘bleak to recessionary’).

Regarding the Federal Treasurer’s criticism of the Queensland Government reported in the Courier-Mail this morning (Treasurer Joe Hockey blames Queensland’s lack of asset sales for business doldrums), I’ve consistently made the point that the lack of privatisation proceeds implies lower than desirable infrastructure spending in Queensland in the next few years (see New Qld Govt faces big fiscal challenges). There is no doubt that the reduction in the pipeline of work has created considerable anxiety for construction and engineering businesses across the State.