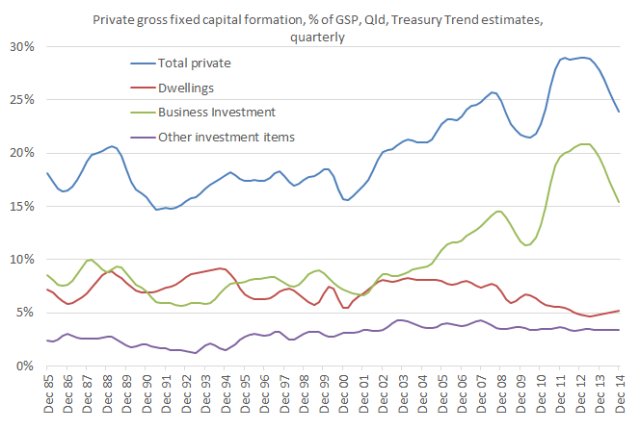 Queensland Treasury’s latest set of State Accounts, which have created so much controversy (see my previous post on Qld’s technical recession), show just how extraordinary the private sector investment boom was in Queensland, with investment increasing as a share of gross state product (GSP) to nearly 30 per cent in 2012-13 (chart above). It was always inevitable that investment would fall from such high levels. The State Accounts also show how important a resurgence in dwelling investment will be to the re-balancing of the Queensland economy as private dwelling investment as a share of GSP is at relatively low levels. Luckily there are positive signs from residential building approvals, no doubt due to very low interest rates (see Residential building will help economy adjust to end of mining boom).

With other positive signs, such as the 18-month high in consumer confidence our Treasurer has referred to, I’m reasonably confident Queensland will avoid a proper recession, as opposed to the technical recession we recorded in late-2014 due to the inevitable fall in investment spending from extraordinarily high levels. A proper recession would entail a broader downturn than what we saw in late-2014, and would see unemployment increase well beyond the current level of 6.6 per cent.

On the definition of recession, it is well known that the commonly accepted definition of recession as two consecutive quarters of negative economic growth can be unreliable as a guide to the true state of the economy, as it possibly is for the case of Queensland in late-2014. Indeed, the US National Bureau of Economic Research doesn’t use the two-consecutive-quarters rule, as it looks at a range of indicators to determine the state of the economy as it moves through the business cycle (see NBER’s Business Cycle Dating Procedure). Regrettably, we don’t do the same thing in Australia, and the two-consecutive-quarters rule is well entrenched.  For that reason, when I was asked by ABC News last Thursday whether the Queensland Treasurer was correct to claim a recession in Queensland in late-2014, I had to agree.

Finally, notwithstanding the reasonably positive outlook for the Queensland economy, the shock coming from the decline in resources sector investment is a very large one, and it would be good to ensure we’re getting as much dwelling investment as we possibly can, which means not unnecessarily holding up or rejecting developments. I’ve previously commented that some recent decisions are concerning in this regard (see Bad day for developers in Qld – risk to future investment jobs). Our State Government and local councils need to be mindful of the economic importance of dwelling investment.

On the economic outlook for Queensland, also see my post from earlier this month: