The current resources sector slowdown is resulting in hard times for many businesses and workers, and it will make the new Queensland Government’s budget management task a lot harder, especially if projected royalties revenues don’t eventuate. Over the last ten years, the Queensland Government has become much more dependent on royalties paid by resources companies (see chart below), and that dependence is projected to increase. 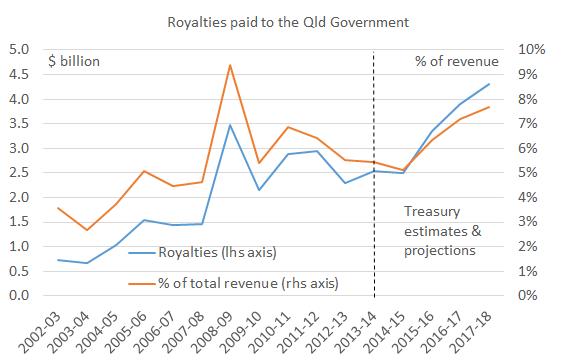 The increase in the relative importance of royalties is due mainly to a surge in royalties, but is also partly due to a slowdown in the growth of Queensland’s two major revenue sources: grants revenue and taxation revenue (which excludes royalties), which have not grown as fast as the expenses of the Queensland Government (see chart below). This reflects factors such as slower economic growth since the financial crisis, meaning, for example, slower growth in stamp duty revenue due to a less buoyant property market, and a slowdown in GST revenue (returned to Queensland as Commonwealth grants). Also significant is that a growing proportion of consumption is on GST-exempt items such as health and education. 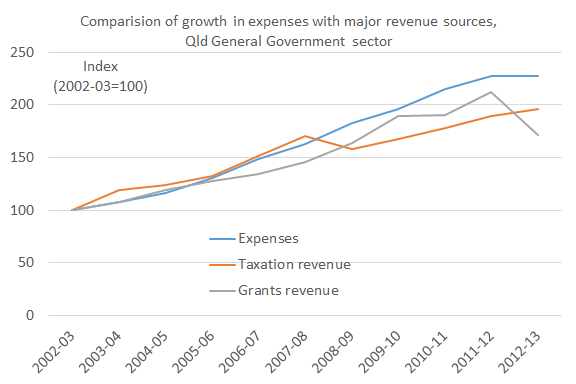 If it weren’t for royalties revenues, Queensland’s State Budget would likely remain in an operating deficit over the forward estimates (see chart below), based on Treasury projections provided in the previous Government’s 2014-15 Mid Year Fiscal and Economic Review. (Note that, according to their election costings, the new Government’s election commitments don’t really change the Budget forward estimates a great deal.)

The Queensland Government’s increasing reliance on royalties, which can prove volatile, must be exercising the minds of Queensland Treasury budget officials. The increased volatility of revenues makes it harder to plan, and makes it more likely that Treasury forecasts will be embarrassingly wrong. Officials will have to be more strident in their briefings to the Cabinet Budget Review Committee when arguing against new expenditures, because revenue projections are less reliable, and the Government may not end up with the money it thinks it’s getting. The Treasury should also be briefing the Government on the merits of broadening or increasing the rate of the GST, given the slowdown of the growth of taxation and grants revenue.