Peter Martin has a solid column in the Fairfax papers this morning on the ABS’s new average weekly earnings data, highlighting the strong growth in mining sector earnings and the very strong growth in earnings in Western Australia (Boom times in West deliver pay bonanza to miners):

These days West Australian men outpace NSW men by $335 a week. Western Australia eclipsed the ACT as the highest earning state or territory more than a year ago.

For women the margins between states are little changed, suggesting Western Australia’s earnings growth is being driven by the male-dominated mining and construction industries.

Martin makes no reference to Queensland figures in his article for good reason, as Queensland’s average weekly earnings growth has been unremarkable in recent times: 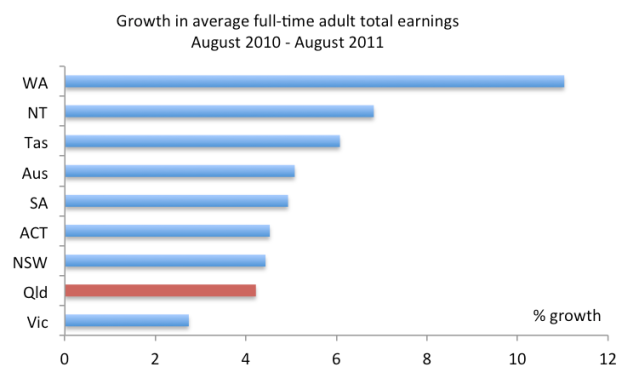 This is related to Queensland’s recent economic sluggishness and our average earnings growth should improve significantly as the economy recovers strongly over the next few years. That said, there may be regional differences in the recovery.

Regarding other labour market news, there is a post at Loose Change on how the Far North’s labour market still appears to be struggling:

October unemployment bounces back up

This entry was posted in Cairns, Labour market, Macroeconomy, Mining. Bookmark the permalink.