Australia’s energy policy is such a confusing mess that the Australian’s economics editor Judith Sloan actually supports the ACCC’s dubious call (in its Electricity Pricing Inquiry Final Report) for the Australian Government to act as a buyer of last resort for electricity, to help energy companies secure finance for new generation capacity. In her latest opinion piece, Sloan observes:

The one interesting recommendation of the ACCC’s report is that the government should operate a program to contract for low fixed-price generation capacity — around $45 to $50 per MWh — for the later years of new projects. These projects would in effect be sponsored by large industrial and commercial users but would be underwritten by the government.

Now, as reported in today’s Australian, the federal government is considering this proposal. Influential ministers, such as Queensland’s own Matt Canavan, see it as a way to support the construction of new high efficiency, low emission (HELE) coal-fired power stations.

Such industry assistance could only be justified as the economics of second best: using one market distortion to correct the economic problems caused by other distortions. To me, it looks like bad policy. We would be better off fixing the distortions which caused the mess in the first place, including public ownership of generation capacity and costly environmental schemes such as the premium solar feed-in tariff (44c/kWh in Queensland) and Small-scale Renewable Energy Scheme (SRES).

Much of the policy action needs to occur at the state level, in Queensland in particular. For example, we need to break up our price gouging power generators CS Energy and Stanwell and ideally privatise them, as recommended by the ACCC.

I would prefer we fix our current energy policy settings before the Australian Government commits to underwriting new generation capacity, taking a significant contingent liability on its balance sheet, the risk it will have to prop up unviable HELE coal-fired power plants in the future. This contingent liability would crystalise if substantial global action to reduce greenhouse gas emissions were agreed and followed through with in future decades.

I should say the ACCC deserves a high distinction for producing such a comprehensive analysis of electricity pricing in Australia and for generally sensible recommendations. But its proposal for government underwriting of new energy generation is not one of them. The ACCC is trying to correct one set of distortions by introducing a new one. This seems like folly to me. 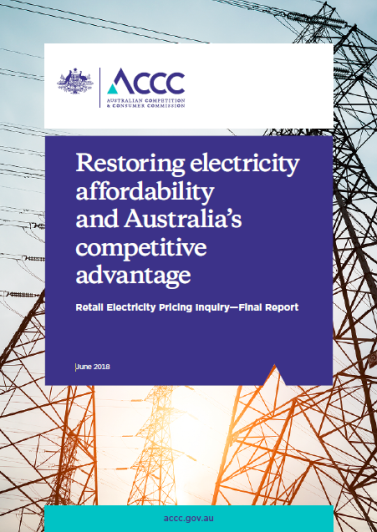 2 Responses to Economics of second best in energy policy