Queensland’s Deputy Premier Jackie Trad is under threat of losing her seat of South Brisbane to the Greens candidate Amy MacMahon, who is benefiting politically from a range of utopian policies disconnected from economic reality (see Friday’s Courier-Mail on the political situation in South Brisbane). I first heard about the Greens’ proposed $1 public transport fares policy while waiting in the green room of ABC Studios at the same time Ms MacMahon was on air discussing the policy with Steve Austin, who would interview me later that morning. Obviously this would be a very costly policy and one without economic merit, especially given the large subsidies already provided to public transport by the Queensland Government. But the $1 public transport fares policy would represent just a fraction of the total cost that Greens policies would impose on Queensland taxpayers.

Based on my interpretation of the policies currently presented, Greens policies could increase total annual Queensland Government expenditure by an incredible $8-9 billion or 13-14% (see chart below). Of course, this is unlikely to ever happen, given the Greens couldn’t possibly win government in their own right, but it is interesting to consider what a Greens budget would look like. 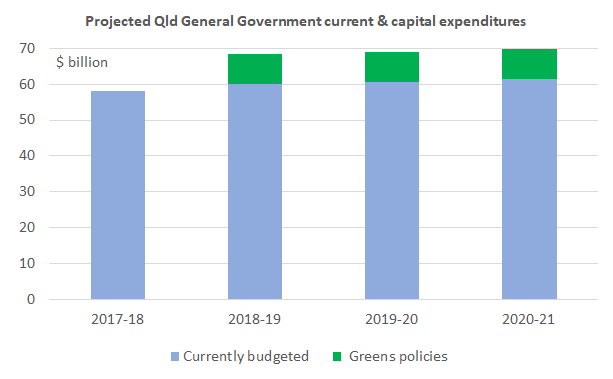 The most egregious Greens policy is the Queensland Housing Trust:

This policy suggests a Greens Queensland Government would increase the stock of public housing in Queensland by over 300% in ten years. It would mean dwelling construction in Queensland would have to increase by over 40% per annum, with massive implications for the demand-supply balance in the building industry and likely resulting in construction cost spikes. The Greens’ policy would massively increase the supply of rental properties which have already been boosted by the apartment building boom. It would suppress market rents and increase vacancy rates for properties. Unsurprisingly, the Property Council and REIQ are highly critical of the proposed Queensland Housing Trust (see today’s Sunday Mail article Greens’ social housing plan slammed).

Another large part of the increased spending that would result under Greens policies is due to the so-called Queensland Public Infrastructure Bank. This would not really be a bank, but a fund that would invest in non-commercial infrastructure. The Greens’ media release on Friday noted:

Under the Greens the State government will establish a Queensland Public Infrastructure Bank to invest $10 billion in public infrastructure over five years.

“Queensland is facing a critical shortage of public infrastructure, so the Greens will create a $10 billion Public Infrastructure Bank funded primarily by making sure mining corporations and property developers pay their fair share.

“The Queensland Public Infrastructure Bank will invest in the schools, hospitals, green space and public transport our State desperately needs…”

The Greens claim they would pay for their additional spending through “a series of major revenue raising measures which target the billionaires and big corporations”, particularly miners and property developers (see https://greens.org.au/qld/powerpeople). But the Commonwealth controls income taxes, so it is unclear exactly how the Greens would raise the huge amount of additional revenue required (noting the rent from the new social housing properties would only provide a very small fraction of the additional revenue required). The Greens could only increase mining royalty rates so far before higher royalty payments had a deleterious effect on the industry. If sufficient revenue could not be raised from the proposed sources, a hypothetical Greens Government would have to sharply increase taxes and charges on all Queensland households and businesses, or we would see total Queensland Government debt grow to over $100 billion.

Note that, in the chart above, I have assumed all the new Greens capital expenditure would occur in the general government sector, based on the descriptions of the type of non-commercial infrastructure the Greens would fund. While the Greens would deliver its housing policy via a Queensland Housing Trust, this would probably be part of the general government sector because it would not earn a commercial rate of return on its investments. Regardless of whether the new Greens infrastructure spending is classified as occurring in the general government or public non-financial corporations sectors, it would still represent a massive increase in total government capital spending (see chart below), and one which would very likely lead to crowding out, skills shortages and sharp cost increases in construction projects across Queensland.

I should note that I find some of the Greens’ proposed policies attractive, such as building a green bridge from Toowong to West End and investing in cycling infrastructure, but we should always be mindful of budget constraints, and any major expenditure proposals should be subject to a cost-benefit analysis. The Greens have presented a utopian policy platform that can only be paid for by much higher taxes and charges on all Queenslanders (and not just on billionaires and big corporations). Otherwise it would result in total Queensland Government debt rising to $100 billion or more. The Greens’ utopian policies warrant much greater scrutiny from commentators and the electorate.