Another example of the high cost of free parking in Toowong

Poor economics is at the core of the latest parking dispute in the leafy Brisbane western suburb of Toowong, particularly a misunderstanding about property rights and the lack of a price mechanism for allocating the car parks (see Toowong commuters stopping residents from parking outside their own homes). Local residents are lobbying Brisbane City Council for the creation of a residential parking permit scheme (see image from the Westside News below), which would give local residents priority for parking, as they argue they are being “parked out of their own street by commuters” catching the train at Toowong station. However, the local residents do not own the streets; the Council does. It may seem unfair that local residents cannot park near their homes at all times, but it may also seem unfair if someone cannot find a park in a local street after they have searched in vain for a park at the Commuter Car Park. It is very difficult to judge fairness.

A market solution would be superior. If the Council metered the scarce car parks in the area around Toowong Village, it would be more likely that the car parks would go to those people placing the highest value on them. Alternatively, the Council could sell a limited number of daytime parking permits, which would be available for purchase by both residents and non-residents. The current situation is sub-optimal, and is a good illustration of what UCLA Professor Donald Shoup called The High Cost of Free Parking.

For further discussion of the economics of parking, see my February post: 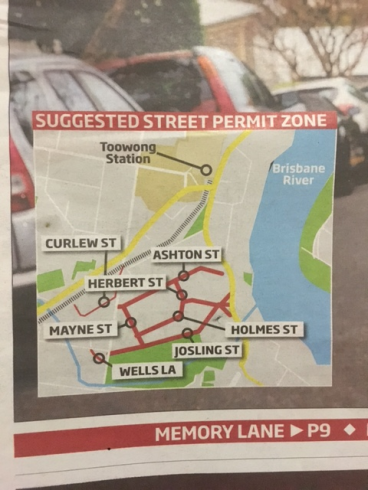 Toowong residents are lobbying for a residential parking permit zone