Again, I am delighted to publish a guest post from my good friend and former Treasury colleague Joe Branigan. The usual disclaimer applies, that the views expressed in this article are Joe’s and should not necessarily be attributed to me.

Targeting infrastructure spending as a % of GSP won’t work

Infrastructure spending is cyclical, and it’s productivity that matters to Queenslanders – not short-term engineering and construction jobs

This recommendation is fundamentally flawed for several reasons.

First, all public infrastructure investment should be assessed on a case-by-case basis to see whether each proposed project represents taxpayer value-for-money. Will the investment increase productivity, which would in turn increase incomes and create jobs in the future by increasing both labour supply (lowering the natural rate of unemployment via improved labour market ‘search and matching’) and labour demand (since higher incomes drives demand for jobs). As Tony Makin from Griffith University has shown (and Ken Henry said when Treasury Secretary), if you invest in bad public infrastructure you lower productivity, and you ultimately lower real incomes.

Second, we need to stop thinking about infrastructure in terms of inputs (i.e. “this is a $10 billion capital program (so it must be fantastic)”) and start focussing on outputs (i.e. “this investment in roads will mean less time stuck in traffic and the estimated benefits exceed the estimated costs to the Queensland taxpayer”). Spending billions of dollars just to hit some artificial spending target will not help us improve our living standards. We need to target our spending and be smart about where we invest in new productivity-enhancing infrastructure.

Third, taking the last 10-years average public investment as the target is not reflective of what’s ‘normal’ since we’ve had (i) the government’s spending response to the mining boom (i.e. the government needed to respond to the consequences of a strong increase in population growth and the consequent need for public infrastructure in the regions as well as in SEQ), and (ii) the massive borrowings to fund the ill-considered GFC response (remember the $17.8 billion capital program in 2008-09, followed by $17.3 billion in 2009-10 (real dollars)). This investment was ill-considered because we were never going into recession since the RBA cut interest rates hard and our exchange rate depreciated by 30% making our exports significantly more competitive – but that’s a story for another day.

Fourth, large infrastructure network investments are cyclical and spending levels should be left to the government-owned corporations (GOCs) to decide in the best interests of customers and shareholders (i.e. ‘us’). For instance, we had the massive electricity network rebuild in the mid-1980s and again in mid-2000s (some might say ‘overbuild’). The SEQ water grid investments in the late 2000s (in response to the fear about water security) is another example of the cyclical nature of public infrastructure investment.

Fifth, we will not create all the jobs we need by investing in public infrastructure. As I argued recently in the Courier-Mail and on this blog, infrastructure investment is about raising incomes, not creating jobs. IPA argues that: “Lifting it back to a decade average of 4.25 per cent would mean spending $12.9 billion in 2016-17 rather than the planned $8.8 billion. Based on analysis by Infrastructure Partnership Australia, that could create more than 10,600 additional jobs.” This kind of analysis is ignorant of how the labour market actually works. What we should be focussed on is reducing the natural rate of unemployment, which Queensland Treasury has estimated is not far below the current unemployment rate. This means, for instance, looking at the barriers to entry for the young and unskilled.

Sixth, the level of public investment must be constrained by the long-term sustainability of the State Budget and the overall fiscal strategy. Not doing so would be unsustainable and reckless. Here, targeting a structural fiscal balance across the Non-Financial Public Sector is a more prudent approach than targeting a net operating surplus in the General Government sector. Moreover, setting a budget constraint on infrastructure expenditure should force governments to prioritise, picking the best productivity-enhancing projects. Here, governance arrangements are vital – for instance, not having the ‘independent’ infrastructure advisor preparing business cases for government might be a good approach. Preparing demand forecasts independently of business case development and counting the deadweight loss from raising taxes (since borrowings are future taxes) as a cost are also important governance measures.

Seventh, it is wrong-headed to argue for increased infrastructure investment just because governments can borrow at lower interest rates than the private sector. The level of the interest rate doesn’t reflect the true risk of the project or the project’s potential costs and benefits – the borrowing rate is lower because of the coercive powers of governments to tax its citizens and pay its debts. Just because the Queensland Government can borrow at 2% rather than 8%, doesn’t make a bad infrastructure investment a good one.

Ultimately, we need to think about infrastructure in terms of productivity. It’s about more than just creating jobs in the short-term, it’s about lowering costs, improving efficiency, increasing incomes and ultimately creating sustainable high-paying jobs for the long-term. That’s what good infrastructure is about; it’s not about making sure the engineers and construction firms have a forward work program so they can sleep easy. China tried that and now they have vast shopping malls with no shoppers, wide roads with no cars, and large cities with no people.

In my view, the pressure applied from industry lobby groups for increased infrastructure spending does not come from a concern about the welfare of the Queensland people, particularly the unemployed, but rather from a concern solely for their own members who will receive contracts from government associated with additional infrastructure spending. Chamber of Commerce and Industry Queensland Advocacy GM Nick Behrens said to the Courier-Mail this week: “We need to be reinvesting in our future and supporting now our engineering and construction businesses that are currently shifting to other states as work dries up.” As I have argued, this is a fundamentally flawed view. 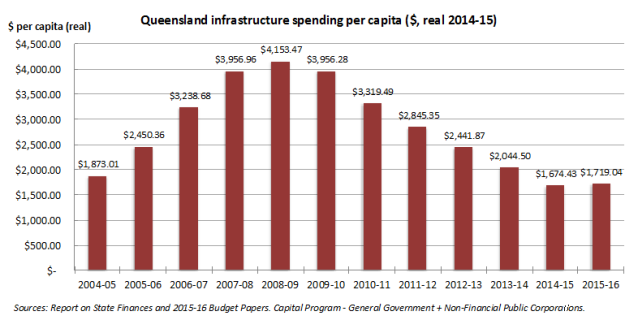