I had an enjoyable chat with Steve Austin on 612 ABC Brisbane radio this morning regarding two topics, Queensland’s underwhelming population growth rate and the State income tax proposal from the Commonwealth Government:

The discussion was prompted by my post on Good Friday afternoon, which observed that, based on ABS population estimates, Queensland has fallen to 5th place in rates of population growth among States and Territories. Yesterday, Steve asked me a good question regarding this post on LinkedIn: “what does this reveal?” I replied that it revealed a few things, including our under-performing economy (related in part to the mining downturn), excessive regulation that is constraining business investment, and a failure to properly manage population growth since the 1990s, which has reduced liveability in Queensland. At the same time, conditions in NSW and Victoria relative to Queensland have improved, meaning we are not seeing the same levels of interstate migration as we once did (see chart below). I expanded on these points and gave some examples in the interview this morning. I suggested South-East Queensland nearly running out of water in the late 2000s is a good example of a failure to properly plan for growth, and it is an example which must have raised doubts about Queensland’s desirability as a place to live in the minds of many people down south. 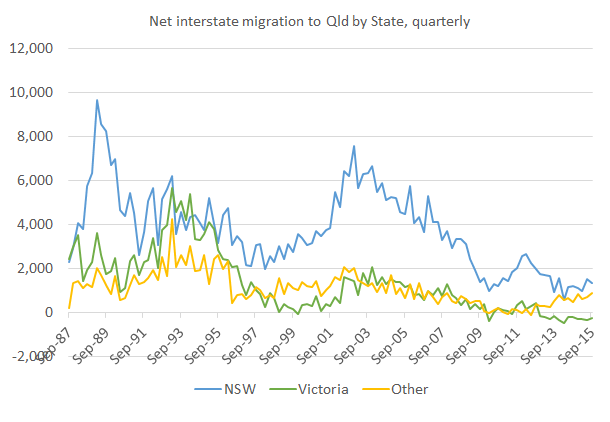 Steve and I also chatted about the Commonwealth Government’s proposal for the States to be given back their income tax powers so they can fund health and education expenditures without Commonwealth assistance. As I told Steve (so long as the Commonwealth reduces its income tax take, so there is no overall increase in income tax revenue) I think this is a good idea. It would end the blame game associated with vertical fiscal imbalance: the large disparity between what the States raise from their own-source revenue and what they spend, with the difference being made up in grants, largely from the Commonwealth (e.g. see the composition of Queensland revenue in the chart below). So the States could no longer blame the Commonwealth for (allegedly) under-funded State services, and the Commonwealth, in response, would no longer have to blame the States for poor fiscal management. As I noted to Steve, this is not a radical new proposal, but rather one that has been discussed in policy circles for several decades, at least since the time of the Fraser Government (1975-83). 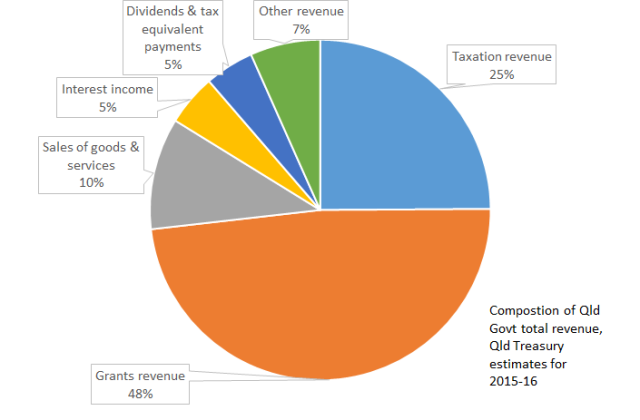 My old friend and Treasury colleague Joe Branigan greeted the Commonwealth’s proposal with much enthusiasm on Twitter:  “Finally a PM dealing with roots not branches…” Well said, Joe. This is a commendable policy proposal that would substantially improve the governance of our Federation.