Big increase in Govt infrastructure spending in election lead up

After a couple of years of spending cuts that have contributed to Queensland’s economic sluggishness, Queensland Government infrastructure spending appears to be on the rise in the lead up to the election (see chart below based on the June quarter National Accounts data from the ABS). I expect spending on the Bruce Highway was a significant part of the increase in the first half of 2014. The timing is fortunate, because the private sector remains sluggish, with the recovery in State Final Demand reported in June quarter solely due to public sector investment, including that by all levels of Government (see Pete Faulkner’s post at his Conus blog and the Government Statistician’s brief ABS State Details). 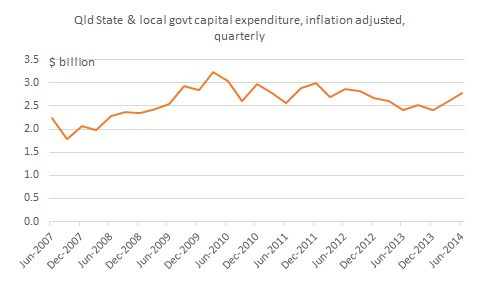