Gold Coast should worry less about its over-reliance on property, tourism and retail 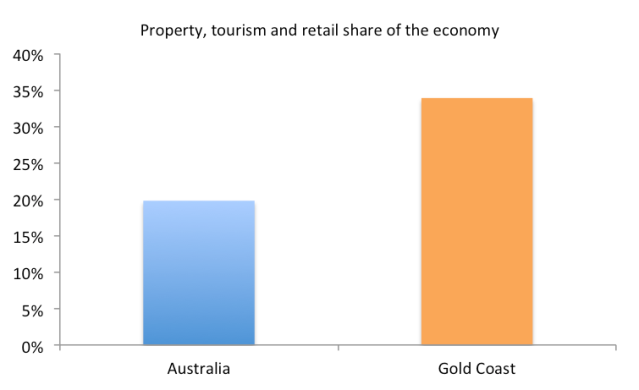 The Gold Coast Draft Economic Development Strategy 2013-2023 expresses concern over the Gold Coast’s reliance on its traditional sectors of property, tourism and retail (see chart above based on data from the Strategy), noting:

The cyclical nature of these industries has left the city vulnerable to boom and bust cycles and has been evident over the past few years with the city impacted by national and global economic shocks.

While it is true that more diverse regional economies have better economic performance on average (see this great article by my former colleagues Bernard Trendle and Gianna Shorney), it’s unclear whether the Gold Coast should deliberately promote the development of particular industries to diversify its economy. The two main points I’d make are:

Regarding the 200km City, a report by Bernard Salt released yesterday highlights the importance of commuter flows from the Gold Coast to Brisbane and other regions (see Gold Coast Bulletin coverage, Gold Coasters among biggest commuters). Many people live on the Gold Coast for lifestyle reasons and are quite prepared to commute to other local government areas to work.

Tradies know what it means to live in the 200km City

Planning for the 200-kilometre city

This entry was posted in Gold Coast and tagged 200kmcity, goldcoast, seq. Bookmark the permalink.