After several years of poor economic conditions which are only now improving, it’s understandable the Gold Coast is excited about the economic potential of some upcoming big events, such as the 2013 Australian Surf Life Saving Championships. The Gold Coast Bulletin reports Upcoming events set to bring in cash:

THE southern Gold Coast is bracing for an economic wave of prosperity as it prepares to host some of the city’s largest events.

The Australian Surf Life Saving Championships, Bleach Festival and Cooly Rocks On are just some of the major events which will be held from this month to June.

The string of events is expected to bring more than $30 million into the economy. Southern Gold Coast Chamber of Commerce president Gail O’Neill said she expected the events season would have a “huge” impact on businesses.

The big events in the first half of 2013 are certainly welcome, but I expect they won’t have a huge economic impact. The Gold Coast is at least a $25 billion economy. New spending of $30 million over the first half of 2013 is equivalent to around 1/4 of one per cent of gross regional product (GRP) for the period. This is respectable, but is probably much less than local businesses may expect. Of course, businesses and hotels located close to the events are likely to benefit much more than other Gold Coast businesses.

Luckily there are positive signs that the Gold Coast economy is recovering, with the unemployment rate dropping over 2012 (see chart below) and a better outlook for tourism (see my post Gold Coast holiday bookings confirm domestic tourism recovery). There is also the possibility of a recovery in the building industry, a major driver of activity across the economy, with the December quarter 2012 Survey of Industry Conditions from Master Builders Queensland recording a satisfactory building industry outlook for the Gold Coast. 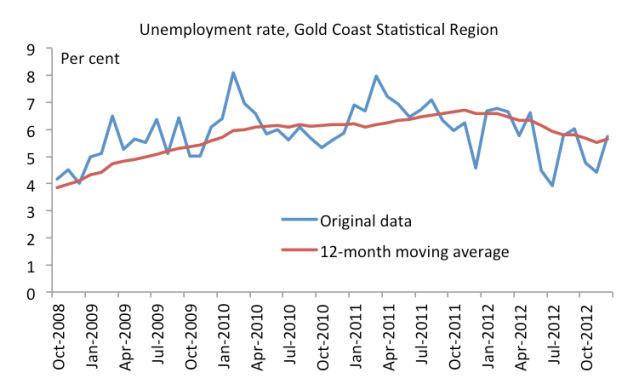