Comments on Qld state debt to the Courier-Mail

I am quoted in today’s Courier-Mail in an article on Queensland state debt, which for the whole Queensland Government (incl. government-owned businesses) is on its way to over $80 billion (see chart below). The paper reports on the Premier’s failure to answer a tricky question regarding how much dividends from government-owned corporations have contributed to debt reduction:

The Courier-Mail reported my comments as follows:

Economist Gene Tunny, principal of Adept Economics, said the state was at risk during future downturns and could face a fiscal crisis if government failed to adopt a disciplined approach to debt reduction. Debt was approaching $80 billion and needed to be below $50 billion to win back a AAA credit rating, he said.

He said there had been a loss of financial discipline since the mid-2000s that had allowed debt to balloon.

The point I was trying to make was that if we do not get our debt under control, then it will keep creeping up and will compromise our ability to respond to future economic downturns and crises. As a former Australian Treasury official, I will always remember the financial crisis in 2008-09, during which the Australian Treasury had to temporarily provide a guarantee of state borrowings, largely to support the huge financing task faced by a nervous Queensland Treasury. I would like the Queensland Government to get its budget and debt under control so the state does not end up in that unfortunate situation again.

If the Queensland Government could reduce total borrowings to $50 billion or less, the aspiration I suggested to the Courier-Mail, then the state would certainly get its AAA credit rating back. I should have been clearer in my comments to the Courier-Mail and noted we may even be able to get a AAA rating back if we can reduce debt to around $60-65 billion. The critical ratio the ratings agencies (e.g. S&P, Moody’s) appear to look at is the debt-to-revenue ratio, and they get worried when it is over 100 percent. Currently, total revenue for the state non-financial public sector is around $63 billion. So if we could reduce total borrowings to $50 billion or less, we would definitely get back the AAA rating and provide a buffer that could help us absorb future shocks. 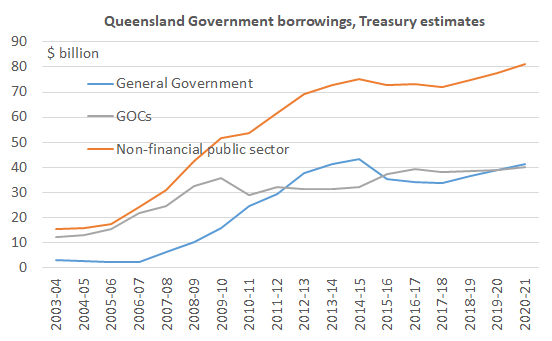 Finally, I should mention the Courier-Mail got in touch with me after it noticed I was a co-signatory to a letter organised by Graham Young at the Australian Institute for Progress regarding critical issues for the Queensland election, one of which obviously was state debt: