Could the Commonwealth Treasury please send me my $5,000, rather than sending it to George St?

Queensland Treasury has produced an absolutely cracking set of post-Budget presentation slides, which it has kindly shared with the Economic Society of Australia (QLD), of which I’m the Secretary. The slide deck contains some excellent facts and charts on vertical fiscal imbalance, the gap between the State Government’s own-source revenue and its expenditure responsibilities, a gap that is filled, and increasingly so, by massive payments from the Commonwealth (see chart below). The Treasury reports that the $23.7 billion the Commonwealth will grant the Queensland Government in 2015-16 is roughly equivalent to $5,000 one-off grants to every person in Queensland. Alas, it does not come directly to us all in $5,000 cheques, but instead goes to George St! Of course, George St does spend much of it on important public works and services, but frequent QEW readers will know I strongly believe that it could spend much of it much more wisely. 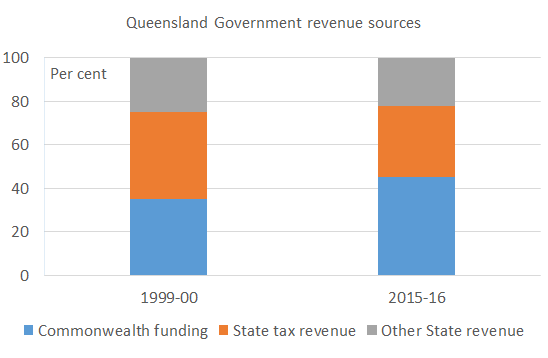 2 Responses to Could the Commonwealth Treasury please send me my $5,000, rather than sending it to George St?