The need for traffic control on the escalators at David Jones, Queens Plaza in Brisbane was a good sign that the Boxing Day sales would go well for retailers (confirming again my belief that the Queensland economy is strong).

Without staff directing the flow of traffic, there could have been a nasty crush as people coming up the escalator from level 1 competed with people entering DJs on level 2 for a step on the escalator to level 3, where Western suburbs gents were racing to pick up their discounted Ralph Lauren polo shirts and Nautica shorts. The Courier-Mail has reported Dawn breaks in Brisbane with mad retail rush, which is a reasonably accurate description.

For those wishing to get to the head of the pack at next year’s Boxing Day sale at DJs, I recommend the main entrance on Level 1 (shown below), which is opened at least 30 seconds earlier than the other entrances. 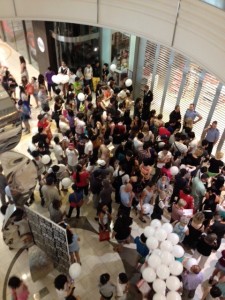 This entry was posted in Retail trade. Bookmark the permalink.