Yesterday I was part of a panel of economic experts consulted by the Queensland Parliamentary Inquiry into the state government’s economic response to COVID-19. The notes I used for my opening remarks are reproduced below. The proceedings were broadcast via Parliament TV and you can watch a recording here (the panel starts at around 2:27:00). GT

Austan Goolsbee, who was chair of President Obama’s Council of Economic Advisers, said that, in a time of pandemic, the best thing you can do for the economy has nothing to do with the economy.

It may be that in future years, after we’ve had a detailed look at evidence from across the world, we learn a different public health response may have had less of a short-run economic cost. But, at the moment, we’re not 100 percent sure of the optimal public health response, and decision makers need to exercise their judgement.

Regarding the economic response, it should be well-targeted and avoid waste, to minimise additional borrowings and future interest payments which are a direct drain from the budget. And we should rigorously assess any grand infrastructure schemes to get the economy moving again, as they could end up being costly white elephants into the future.

It needs to be recognised the state government has much less capacity to respond than the federal government, which has superior financial resources and borrowing capacity. State government responses can’t be generally available measures such as JobKeeper, but they need to be targeted to those most in need, and they need to be well-administered.

The state government is better positioned than the federal government to identify state-specific industry and regional needs and should address its assistance in such a way. The sectors and regions in most need should be obvious to the committee, such as tourism and hospitality, and those regions most dependent on them, such as Far North Queensland. I recognise that the state government has provided assistance to tourism businesses, as well as to businesses in other sectors.

There is a clear need to improve state government program administration, to minimise the burden on and the frustration experienced by small business owners. There have been the reported administrative failures regarding the COVID-19 Jobs Support Loans and Adaption Grants programs. The first-come-first-served nature of these programs has led to frustration and, arguably, to assistance not going to those small business owners most in need. The state government needs to ensure its programs are well-designed and administered by competent and experienced public servants.

On the state budget, the deficit will naturally blow out by several billion dollars, and I expect total state debt to approach and possibly exceed $100 billion over the forward estimates.

I accept the Government’s point that it is not possible to present a full budget at this time, but I would suggest that it could publish internal estimates of the state budget position and debt which I expect the Treasury is regularly updating. It could publish these with all the necessary caveats about their accuracy in this time of radical uncertainty.

While the Treasurer is right to reject austerity, as it is imperative to avoid perverse fiscal policy, the government needs to present a long-term plan for constraining the growth of spending and stabilising the debt. Its announcements regarding a prudent public service freeze and savings of $3 billion over the forward estimates appear sensible, but we need to see if those plans are ultimately realised.

Finally, we need to capture the lessons regarding the economic response, alongside an assessment of the pros and cons of public health measures, in a comprehensive report and incorporate those lessons in the state government’s pandemic playbook for the future.

One of the important lessons is that government can relax regulations quickly when it needs to, such as regulations around liquor sales. The government should undertake a comprehensive review of the full suite of regulations which are affecting businesses, and remove those which don’t pass a cost-benefit test. 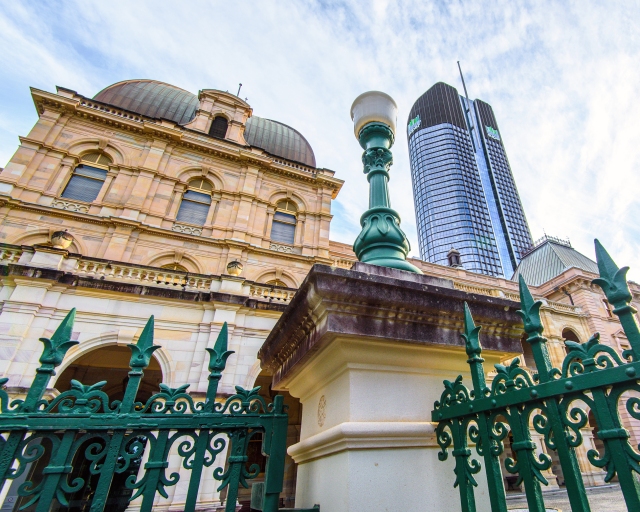 Parliament House from the entrance to QUT on George St, with 1 William St, the Tower of Power in the background. Photo by Jennifer Tunny.