According to ABS State Accounts data released today, Queensland’s real gross state income surged 7.5% in 2016-17, the highest growth rate among States and Territories, owing to the strong recovery in coal prices during that financial year (see chart below).* Growth in real gross state income incorporates improvements in the terms-of-trade, while real gross state product (GSP) growth does not, and the latter measure was a much less impressive 1.8 percent. Now much of the gains in the terms-of-trade accrue to mining companies that are majority foreign-owned, but the Queensland Government does capture some of the gains through higher royalties, particularly on coal. To illustrate, coal royalties in 2016-17 ended up being an estimated $3.4 billion compared with $1.7 billion in 2015-16.

Coal prices higher than those forecast by Queensland Treasury have continued into the new financial year, and this will provide a nice little windfall for the incoming Queensland Government after next Saturday’s election. Former Queensland Resources Council chief Michael Roche commented on a LinkedIn post of mine earlier this week that he “would guess there is a $1 billion coal royalty windfall in 2017-18 awaiting the next government”, and I think that’s a reasonable estimate based on recent coal prices compared with budget assumptions. 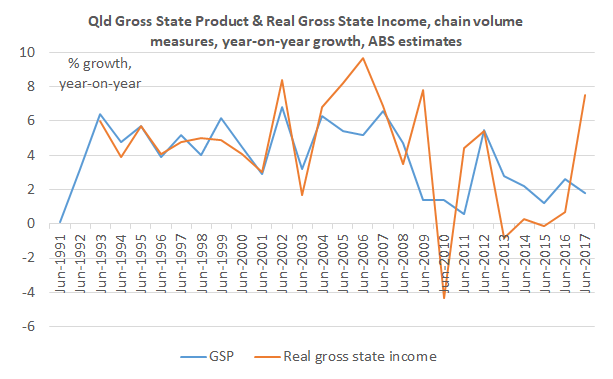