Qld’s exports to China doubled in less than 2½ years

There was some excellent commentary on the US’s and Australia’s relationships with China on ABC Radio National over the weekend which I can highly recommend:

FT’s Martin Wolf interview: Is the US wrong on the trade war? on Saturday Extra with Geraldine Doouge, and

30 years after the Tiananmen Square massacre, how strong is Australia’s relationship with China? on Between the Lines with Tom Switzer.

Some remarks from Tom Switzer in particular made me think about the risks of future economic or political crises in China, and what they might mean for the Australian and Queensland economies. Obviously, we are particularly vulnerable. China is our largest trading partner. Consider that, as shown in the chart below, Queensland’s exports to China have doubled over the 28 months to April 2019. 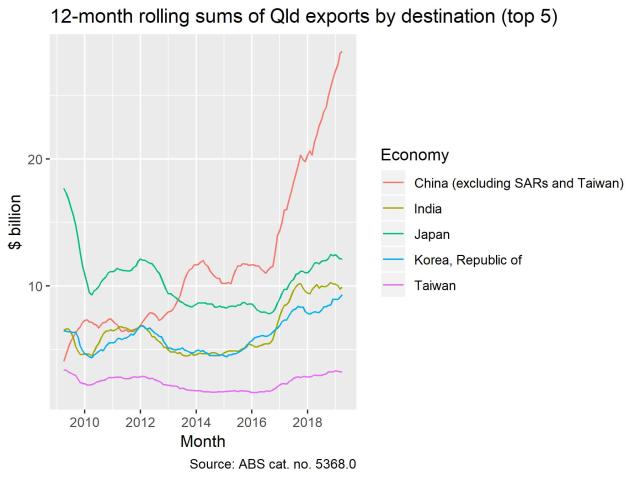 Much of that surge was due to a strong recovery in coal prices over the last few years, although they now appeared to have peaked. As the CCIQ noted in its media release accompanying the new exports data from the ABS last week, there has been “some moderation in coal prices”. CCIQ Head of Media and Industry Dan Petrie observed:

As the Queensland Treasury briefing on exports demonstrates, Queensland’s major export is coal, with an export value of $36.5 billion in the twelve months to the end of April 2019. Coal accounts for around 43% of Queensland’s total goods exports of $85.2 billion over the same period.

You can see how Queensland’ monthly merchandise exports are down from their most recent peak at the end of 2018 in the chart below. 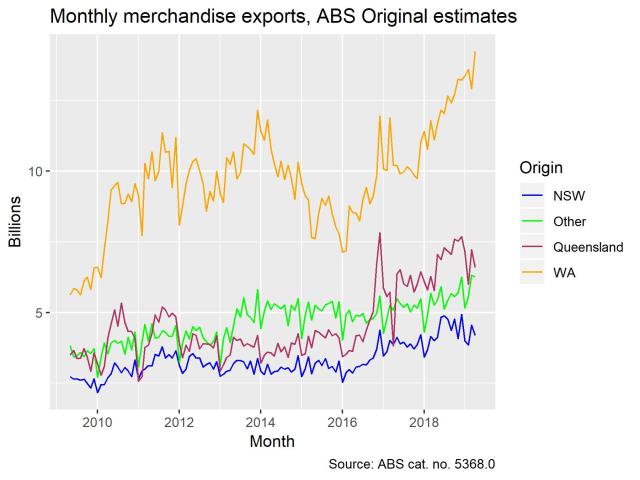 Here’s a plot of monthly exports to Queensland’s major trading partners showing how the value of exports to China has fallen from the late 2018 peak, although they are still double what they were a few years ago. Also note these data are not seasonally adjusted, and it is possible there is some seasonal variation.

In summary, Queensland’s export performance over the last few years has been extraordinary, although we are now much more dependent on China than we ever were in the past, with all the associated risks that involves.